Types of Cucumbers with Pictures

Well, cucumbers seem so similar in taste, flavor, and appearance, that we hardly know if they have types and varieties. This article gives you various types of cucumbers. Read on, and pick the best ones for pickling or slicing.

Well, cucumbers seem so similar in taste, flavor, and appearance, that we hardly know if they have types and varieties. This article gives you various types of cucumbers. Read on, and pick the best ones for pickling or slicing.

Cucumbers (Cucumis sativus) belong to a rare group where they are grown as fruits, but are treated and eaten as a vegetable. They are members of the gourd family Cucurbitaceae. Cucumbers can be broadly classified into three categories―slicing, pickling, and burpless. There is a specialty category too that has characteristics similar to the other three, but they don’t need pollination to grow.

Slicing: They include cucumbers that are served raw in salads and sandwiches. Sometimes, these are also added to give a crunch in sushi, or as toppings in drinks. These mostly have thinner skins, a sweeter taste, and minimal seeds.

Pickling: Pickling cucumbers have bumpy and thicker skins. These are generally smaller than slicing cucumbers. Their flesh is dryer, making them apt for pickles, soaked in brine, vinegar, and similar solutions.

Burpless: These cucumbers are the easiest to digest. They have thin skins and a pleasant taste. They are bitter-free, and have less of a burp-causing compound.

The classification of Armenian cucumber is ambiguous. It actually belongs to the melon family, but is also considered as a cucumber variety. It is long and snake-like, hence the name―snake cucumber. The skin of this cucumber is thin, the color may vary from pale green to darker shades, and it is devoid of bumps. It’s flesh is crisp and mild-flavored. This fruit doesn’t need to be peeled. The good thing about this melon is that, it has a relatively dryer flesh, making it last longer in the refrigerator. It is ideal for a sliced cucumber salad with sprinkles of fresh herbs like basil, tarragon, etc.

Cornichons are bumpy and tweedy, crunchy and tangy. They are the smaller version of gherkins, that have been picked before maturity. A fully grown cornichon becomes sharper and spikier. The French call them cornichons, while the English call them gherkins. They make excellent pickles, and are often seen chopped on an appetizer plate, or in sandwiches.

These cucumbers are long, thin, and with no or minimal seeds. They are similar to Japanese cucumbers, but are less prickly. These smooth-skinned cucumbers have a mild and non-existent flavor. They are often plastic-wrapped instead of wax coating them for increasing their shelf life, though the unwrapped ones are available with farmers. This variety of cucumbers is pricey for its thinner skin.

Gherkins are small pickling cucumbers. These are often pickled in brine or vinegar. They are traditionally served cold, as cooking makes them lose their flavor. These pickled cucumbers are usually accompanied with sandwiches.

This is another bumpy cucumber that has versatile properties. The skin is in the hues of yellow or green with bumps and inconspicuous seeds. But the bumps are lesser than gherkins. They are crunchy if eaten raw, and flavorful if pickled. These are generally sold in the markets as pickling cucumbers.

Persian cucumbers come in a wide range of lengths. Some can be long, while some can be shorter. Sometimes, they also have bumps like the gherkins, and overall, they are similar to Japanese cucumbers. They are thin-skinned and have a mild flavor. You don’t need to peel this cuke variety.

Their skin tends to be thicker and bitter than other cucumber varieties. They have a smoother skin, with a dark green appearance. They possess seeds, which can be scrapped out by cutting them into half. To increase their shelf life, these need to be peeled or scrubbed before having. They are most commonly found in North America. The ones available in stores are generally waxed, for them to retain moisture. Even un-waxed varieties are available, but they still require peeling due to their bitter skin. 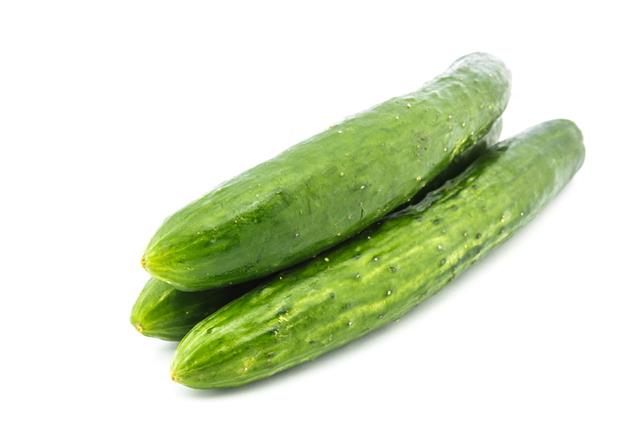 Japanese cucumbers are actually the fruit of a climber, but are referred to as a vegetable. They are one of the varieties of burpless cucumbers, but can be used in pickling or slicing. They have an appearance similar to English cucumbers, but with a prickly skin. The prominent thing about these cucumbers is that their flesh is 20 degrees cooler than their skin.

This is a rare variety of cucumber that falls under the specialty case. It has a round, lemon-like appearance, hence the name. It is sweet, flavorful, and easily digestible. Despite being served in its raw form, it looks lovely on salad plates, and has an excellent pickling side too. The best thing about them is that they are never bitter, since they lack the chemical that imparts a bitter taste. The skin is thin, and with minimal soft seeds.