A Detailed Information Booklet on the Different Types of Squash

Squashes are broadly classified into winter and summer squash. The different types of squash presented below include varieties from across the globe. These squash plants are grown in diverse climatic conditions. 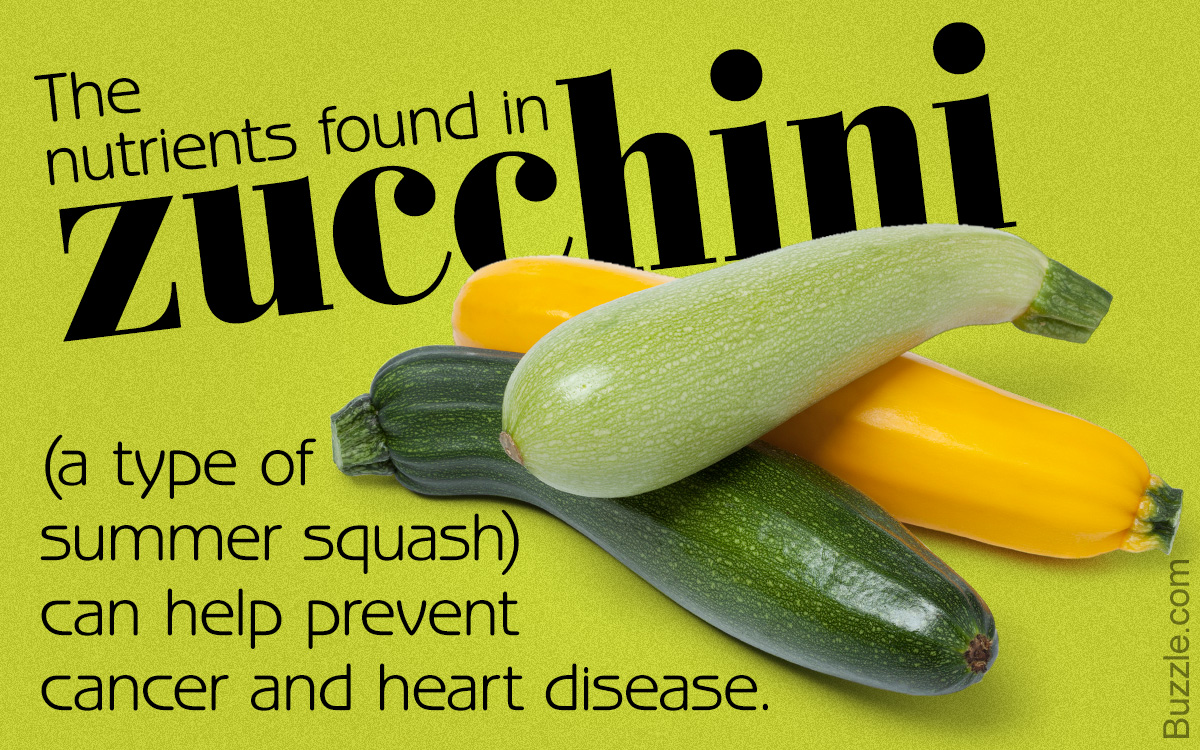 Squashes are broadly classified into winter and summer squash. The different types of squash presented below include varieties from across the globe. These squash plants are grown in diverse climatic conditions.

Squashes form a group of four species of Cucurbita genus, native to Central America and Mexico. Although squash plants have originated in Central America, they are also grown in Europe, North America, Australia and India. The summer and winter squashes differ in terms of the growth stage at which they are harvested. Summer squashes are harvested when they are in an edible form and tender; they are not fully mature at the time of harvesting and have a short shelf life. On the contrary, winter squashes are harvested when they become fully mature.

Squash is a type of vegetable grouped into two types, the winter and summer squashes. Let us find more on the different kinds.

• This summer squash variety has a yellow and bumpy skin. However, upon closer examination, one can see that skin texture is actually quite smooth.

• The flesh of yellow crookneck squash is sweet and it tastes better when harvested when 6 inches long. It means the squash is harvested before it becomes fully mature.

• This variety of summer squashes is known by names like Button Squash, White squash, Sunburst Squash, and Scallopini.

• Scalloped edges, small size and a shallow & round shape – which resemble a flying saucer – are the distinguishing characteristics of Pattypan squash.

• The Pattypan squash comes in three varieties i.e. white, green and yellow. It is harvested at a tender age – not greater than 2-3 inches in diameter.

• Pattypan squash is a rich source of niacin, magnesium and vitamin A & C.

• The zucchini squash is similar in appearance to a ridged cucumber. Although it is used in food preparations as a vegetable, zucchini is basically an immature fruit.

• Zucchini squash could be yellow, green or light green. Courgette is another name used for zucchini.

• The zucchini plant attains a healthy growth in temperate regions. This plant is cultivated not only for its fruits, but also the flowers, which have a culinary use.

• When it grows 8 inches long, the zucchini is picked for culinary purposes. It can be eaten raw, cooked lightly and also fried with butter or oil. Zucchini is used in Thai, Mexican, Italian, French and many other cuisines.

• Vitamin A, folate and potassium are some of the important nutrients present in zucchini.

• The yellow summer squash is picked when it is still young. The squash has to be picked before it reaches reach complete maturity; a fully grown squash becomes watery and tasteless.

• The plant needs a mild weather for healthy growth. Vines of the yellow summer squash plant reach a height of 60 cm-90 cm.

• The Acorn squash is green in color and it has longitudinal ridges on its surface. The newer varieties like Golden Acorn are yellow in color.

• Acorn squashes are 4-7 inches long and their weight ranges from 1-2 pounds.

• Baking is the most common practice followed in the preparation of acorn squash dishes. Steaming and sauteing are few other procedures used for cooking acorn squashes.

• The acorn squash is eaten mainly to obtain dietary fibers and potassium. It also provides the body with nutrients like vitamin C and B.

• Turban squash, one of the commonly cultivated varieties of winter squash has its origin in South America. It was introduced in North America in the 16th century.

• The rind of turban squash has a deep color and it is hard. Base of the squash is flat and its top is thinner.

• The shape of turban squash appears similar to the hazelnut. “Mini Red Turban”, “Turk’s Turban” and “Aladdin’s Turban” are the different varieties of this squash.

• The turban squash needs a warm climate to attain healthy growth. Apart from warm climate, well-drained and fertile soil is needed for cultivating the plant.

• Some of the important nutrients that are present in turban squash include vitamin A, vitamin C, iron and potassium.

• It is a Japanese variety of winter squashes that possesses a knobbly-looking, hard skin. The skin color is deep green. Shape of the Kabocha squash resembles a squatted pumpkin.

• Kabocha squash weighs about 2-3 pounds. The squash is known for its sweet taste.

• The Kabocha squash belongs to Cucurbita maxima  species. It is mainly grown in Japan, Thailand and South Korea.

• The kabocha squash, after being harvested, should be stored in a warm place for a period of 10-12 days. This practice need to be followed to allow the squash to ripe fully and thereby, raise its sugar and carbohydrate content.

• It is a seed-bearing squash variety with an oblong shape. Spaghetti squash is known by different names like noodle squash, vegetable spaghetti, spaghetti and spaghetti marrow.

• Spaghetti squash is found in colors like yellow, ivory, orange, etc. The flesh could be bright yellow, white or orange in color.

• The flesh of spaghetti squash, upon cooking, is transformed into a fibrous mass – which appears similar to ‘spaghetti’. Boiling, steaming and baking are some of the commonly used methods for cooking spaghetti squash.

• The spaghetti squash plants are monoecious in nature. It means male and female flowers are present on the same plant.

• The hubbard squash has a tear-drop shape. It belongs to the species, Cucurbita maxima.

• The hard surface of hubbard squash allows storage for long periods of time. Color of the skin of this squash can be golden orange, green, gray or blue.

• Hubbard squash can be baked, steamed, roasted, boiled and sauteed. Owing to its sweet taste, hubbard squash is often used in the preparation of baby foods.

• Vitamin A and C contained in hubbard squash makes it a highly nutritious food. Also, the squash contains almost no fats and has plenty of fibers.

The word ‘Calabaza’ is a Spanish term used in reference with melons and gourds. The Calabaza gourds are found in a variety of shapes. However, some of the traits shared by them include branched tendrils and large-lobed leaves.

The types of summer and winter squashes mentioned above include varieties of that are useful for cultivation and which also offer some nutritive value. 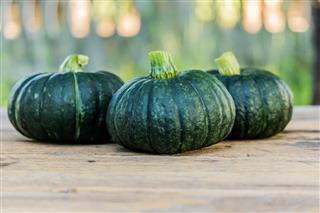 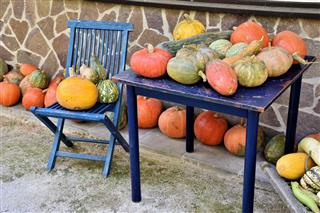 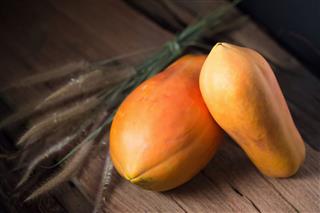 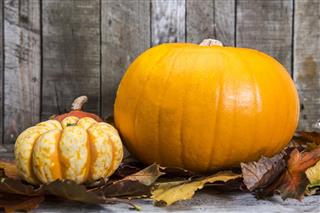 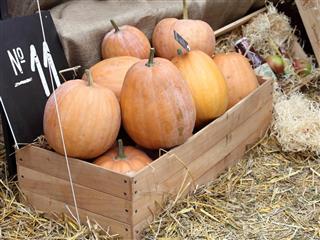 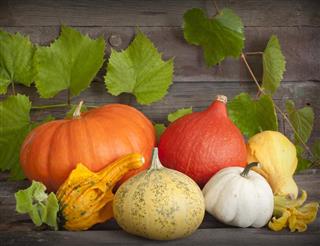 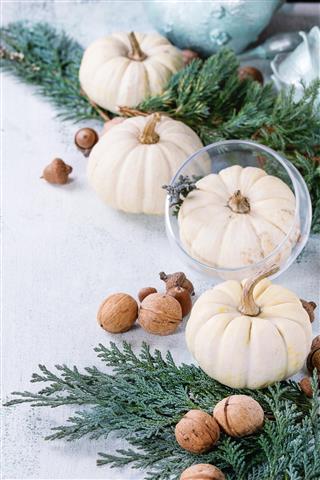 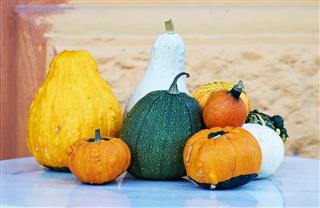