Arugula, which is commonly referred to as garden rocket, is a nutritious green leafy vegetable of Mediterranean origin. NutriNeat provides information on the wonderful health benefits of arugula. 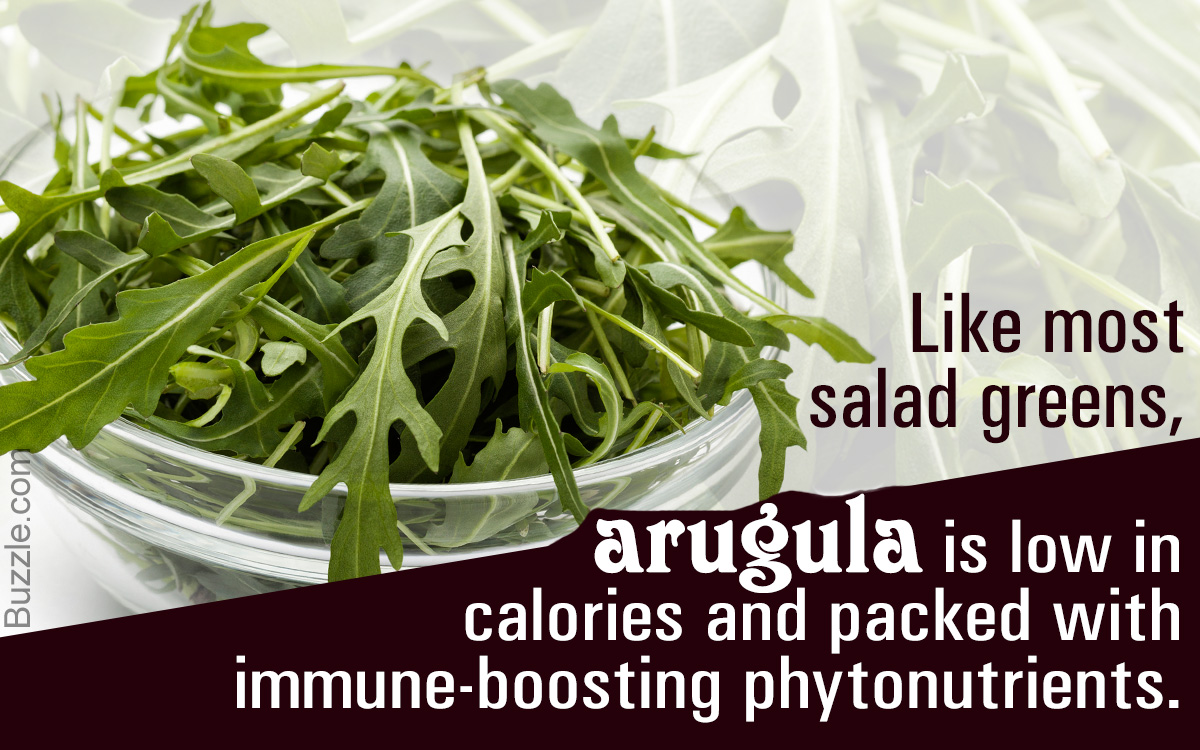 Arugula, which is commonly referred to as garden rocket, is a nutritious green leafy vegetable of Mediterranean origin. NutriNeat provides information on the wonderful health benefits of arugula.

A peppery-flavored cruciferous vegetable that is commonly used as a salad green, arugula is a powerhouse of nutrients. While mature arugula leaves are spicier, the tender leaves are milder in terms of pungency or spiciness.

The scientific name of Arugula is Eruca sativa and it belongs to the Brassicaceae/Cruciferae family, which also includes vegetables such as radish, broccoli, Brussels sprouts, cabbage, cauliflower, collard greens, wasabi, watercress, horseradish, kale, rutabaga, turnip, etc. Native to the Mediterranean region, this plant is known by several names such as salad rocket, roquette, rucola, rucoli, rugula, colewort, etc. The leaves, as well as the flowers of this plant are edible. It is believed that the ancient Romans used its seeds to flavor oil, and there’s some evidence of the use of its seeds in aphrodisiac concoctions, which dates back to the first century.

The United States Department of Agriculture (USDA) classifies vegetables into dark green vegetables, orange vegetables, legumes, starchy vegetables, and other vegetables. Garden rocket is placed in the category of dark green vegetables. According to the USDA, the recommended daily intake for vegetables should be 2 to 2½ cups for women, and 2½ to 3 cups for men. Though one must consume all types of vegetables, one should have at least 3 cups of green vegetables in a week, as these are packed with vitamins, minerals, and phytochemicals. Unfortunately, the recommended intake of leafy vegetables is seldom met, considering the current consumption patterns. Thus, dietitians and nutritionists often stress on increasing their intake. Many of the leafy vegetables can be consumed raw in the form of salads. Considering the wonderful health benefits of arugula and its high nutritional value, one must try to incorporate this vegetable in one’s diet.

According to the USDA National Nutrient Database, 100 g of raw arugula provides:

It is the presence of several vitamins and antioxidants that increase the nutritional value of arugula. This leafy vegetable also contains the following nutrients:

Though arugula is often used in salads, it is basically a cruciferous vegetable. It contains compounds called glucosinolates, which are known for their ability to protect the body against free radicals. Arugula health benefits are basically attributed to the presence of vitamins, minerals, and phytochemicals.

Being a member of the family of cruciferous vegetables, arugula is rich in dietary fiber and potent antioxidants. Moreover, it contains glucosinolates. Studies that have been conducted to analyze the effects of glucosinolates have pointed out that these compounds may reduce the risk of lung, colorectal, breast, prostate, and pancreatic cancer.

This vegetable also contains kaempferol and quercetin, which are both anti-inflammatory compounds that are believed to provide protection against cancer. Indole-3-carbinol and isothiocyanates present in this vegetable also help reduce inflammation.

Chlorophyll is a green pigment that is found in the leaves and green stems of plants. Certain studies have shown that chlorophyll, as well as its derivatives can limit the absorption of aflatoxins, which are mycotoxins that could be produced by mold growth in food items, especially tree nuts and corn. These toxins can cause damage to the liver. Since arugula is quite rich in chlorophyll, consuming raw arugula can certainly prove to be beneficial.

Arugula is a good source of vitamin A, which in turn is essential for keeping the eyes healthy. It contains phytochemicals or carotenoids called beta-carotene, lutein, and zeaxanthin, which are believed to lower the risk of eye problems such as cataract and age-related macular degeneration. Being a source of beta carotene, folate, iron, and vitamin C, this leafy vegetable can also help promote hair growth.

It is also a good source of vitamin C, which is a potent antioxidant, with an ORAC value (oxygen radical absorbance capacity―a measure of anti-oxidant strength) of about 1904 µmol TE per 100 grams. Antioxidants are substances that inhibit oxidation. Vitamin C helps boost the immune system, and provides protection from the free radicals.

This cruciferous vegetable is also a source of vitamin K, calcium, and magnesium. As a result, incorporating it in one’s diet will help in keeping the bones healthy. Following a diet that includes food items rich in vitamin K, as well as calcium will lower the risk of fractures, and improve the bone mineral density. Moreover, this vegetable is low in oxalates, which are salts that impair the absorption of calcium.

It is a good source of dietary fiber. Thus, including it in one’s diet would help in improving digestion and regularizing bowel movement.

The phytochemicals and antioxidants that are present in arugula facilitate detoxification. The sulfur compounds present in this green vegetable help in the production of glutathione by the liver, which helps fight against the free radicals.

Including this vegetable in the form of a salad is a great idea, especially for dieters or individuals who are conscious about their calorie intake. Besides providing numerous health benefits, this leafy green vegetable is very low in calories. The calorie intake for consuming 100 g of fresh leaves is just 25 calories.

Arugula was used as an aphrodisiac in ancient Rome. According to a study published in the March edition of the Journal of Al-Nahrain University in 2013, the consumption of arugula leaf extracts by mice was linked to increased testosterone levels and sperm activity. This suggests that this leafy vegetable might possess aphrodisiac properties.

The aforementioned nutritional information shows that including arugula in one’s diet can help promote good health. Arugula can be consumed by women during pregnancy. However, it must be washed thoroughly. This is to lower the risk of food-borne illnesses that could occur due to the presence of bacteria or parasites in unwashed vegetables.